by Bisera Atanasova for the Carl Kruse Blog

The Victorian era gets its name from Queen Victoria (1819 – 1901), an exquisite lady who kept her throne warm for an unusually long period – from 1837, until her death in 1901. An exciting period of prosperity in literary schools, artistic styles, socio-political and religious movements. Social classes in England were rapidly reformed in this period; the middle class and its power significantly increased with the expansion of industry, for example. However, also a period that ensnared many with poverty and injustice.

The Victorian period is marked by the triumph of evolutionism in science, rapid industrialization, economic and political rivalry between countries, the (insufficient) emancipation of women, the rise of urbanization, forces that had vast impact on the future of England and were cause of optimistic progress. However, pessimism, melancholy, and doubt marked the last phase of this era. Rapid industrialization revealed lesser-desired aspects of human endeavors. But, Victorian England was an era that took frequent baths in the warm waters of an era of peace, prosperity, and an expansion of science and culture. Literature and theater flourished – dramas being particularly interesting to the masses. This led to new theaters, stage managers, and to a new kind of profitable business. Literature and drama, on the other hand, served as a “way out” and influenced a changing society (as they still do today). This should depict a more accurate picture of this unusually interesting era. 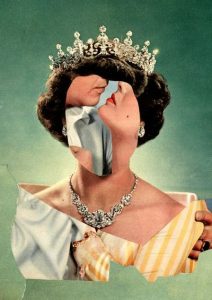 The concept of yin-yang was something likely unknown at the time; but, reading about the Victorian era, we can apply the concept of yin-yang as a way to simplify and explain the things that surrounded people that lived through this. The yin-yang in this context can be explained as the angelic and the demonic aspects of the things we experience – angelic meaning the good, pure, and gentle things, and demonic meaning anything you can imagine that doesn’t fit in the white area. But, what about the black in the white and the white in the black?  Perhaps we can take another look at the definition of a Victorian woman and find the answer there – the woman is the yin, and the man is the yang – or to put it in simpler terms: the woman is an angel, and the male that accompanies her is the demon. But, if we take a look at Victorian literature and art, we can see that the ‘towering woman’ is not an angel and an angel only – she appears as four central types: the angel, the demon, the old maid, and the fallen woman. “The first two appear to be emanations of eternity, the latter two rise from withing Victorian society. Yet there is incessant interfusion among these four categories: none is undiluted by the others.” – writes Auerbach.

“This book grows out of feminist criticism, but neither woman nor women are its sole protagonists: my subject is the victorian cultural imagination, in the chaos of its apparent inconsistency and the intensity of its underlying coherence. This imagination is essentially mythic, though it tries to be scientific, moral, and “real”; its most powerful, if least acknowledged, creation is an explosively mobile, magic woman, who breaks the boundaries of family within which her society restricts her. The triumph of this overweening creature is a celebration of the corporate imagination that believed in her.”

These are the lines with which Nina Auerbach opens her study of the towering, angelic woman who possessed the Victorian imagination; and the demon that always accompanies her. But, does the author point to the fact that demon is just another word for male in the Victorian era? It must be so, because the definition of a good woman Victorian woman, whether married or single, was an angel dependent on her partner (that is, she is weak, fragile, and delicate as a rose and could make no decisions for herself). Yet this is wrong on plenty of levels; firstly because it defies the purpose of feminist criticism, something Auerbach was aiming for here, and secondly because this was never the case in the Victorian period. The woman was a true oxymoron because she was both an angel and a demon at the same time.

So, let us get back to the Victorian era; the only thing left for our dainty woman to do in the dirty, oppressive world was to learn her moral values and dedicate herself to being a good mother, wife, or daughter. In fact, women’s rights were so limited, that with marriage they automatically lost ownership of all property and money they own. Their material belongings, as well as their whole characters and bodies, belonged to their husbands in the blink of an eye. Victorian women were, in a very real sense, the property of their husbands; their main task was to give birth to children and take care of the household. To be a Victorian lady, you need to be wide-eyed and full of innocence; but you also need to be agonizingly dull, with no intellectual capabilities and full of ignorance. This is the first, essential definition of a woman that Auerbach successfully elaborates, explains, but also shatters in her book Woman and the Demon: The Life of a Victorian Myth.

This book (or study) is primarily focused on analyzing the three main types of women: the victim, the queen, and the fallen woman. Naturally, the victim is usually the angel, the queen is the heroine, and the fallen woman is “a pure woman; a creature ungoverned by law.” Each type carries her mythical energy; one that is so dangerous that it simply needs to be restricted. That is why depicting a woman not as a queen or a fallen woman, but rather as a fragile, pure, and even ideal angel, is far easier than having to tame her fieriness.

But, why are we so drawn to angels? Why did the Victorian woman have to fit into a societal mold that shaped her into something she wasn’t, when in reality we don’t even like angels – we despise them? This is, to a large extent, the whole meaning of this piece of feminist criticism – Nina Auerbach uses the deepest, most complex shades of the palette to paint a picture of the Victorian cultural imagination, all while examining, or perhaps debunking the most twisted myths of women, some of which we still haven’t overcome and stopped believing in. But, what are myths if not ideas that help us shape our opinions and beliefs? Unlike myths, our thoughts can most definitely change and move forward – because everything that is part of human society is, ultimately, a myth that we once believed in.

The home page of the Carl Kruse Blog: https://carlkruse.at

Contact: carl AT carlkruse DOT comReminisces of starting a blog from the first post.More info on Queen Victoria and the Victorian Age here.
Also find Carl Kruse on Behance.

2 thoughts on “Life of a Victorian Myth”