Sleep.  Often, when times are strained and duty lingers on the mind, we find ourselves trapped in a cycle of waking lethargy as a result of sleep deprivation, which is in turn exacerbated by worrying about sleeping itself.

I have found myself in this troubling cycle of late; feeling obliged to wake at a certain hour in order to fulfill the tasks of the day, yet often unable to drift off at night, despite my rampant fatigue. Even upon closing my eyes and attempting to dwell upon mindless thoughts, I feel my brow begin to furrow and my face twitch as my mind fills with complexities and anxieties, and it is sincerely difficult to quell these concerns in time for the eight hours I know I need to function well. 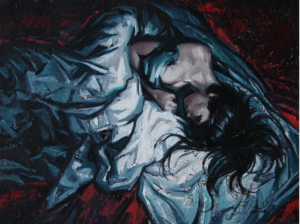 Presentiment of Insomnia by Sergey Ignatenko

Purportedly, the Ancient Greeks had a methodical approach to sleep and dreams, as a result of particular beliefs about the significance of dreams themselves, including communication with the gods and the afterlife and the therapeutic benefits of dreaming.

Most of these theories can be discovered within the Aristotelian Corpus, wherein one finds Aristotle’s rationalistic, yet also naturalistic, approach to sleeping and dreaming. In De Somno et Vigilia, he propounds that sleeping is merely a ‘privation’ of waking, suggesting that sleep is a natural physiological counterpart to being awake, for both the human and the animal. Aristotle asserts that sleep is then a necessary psychological complement to physical life, a time for imagination within the soul to take precedent over the constant movement of everyday life, where time is too short to reside in dreams.

With regards to evolution, Aristotle equates the necessity of sleep to the necessity of food, as an essential impulse that is innate from birth. Unlike fainting and unconsciousness, he suggests that sleep is a vital state of being for the soul. If it were merely the state of being unconscious that were crucial to well-living, then we would be fainting more often, one would suppose. Aristotle indicates that sleep occurs because of ‘the reverse flow of the solid matter, carried upwards by the naturally inherent heat, en masse towards the primary sense-organ [the brain]’ (De Somno). But if the act of sleep is so natural, and so evolutionarily perfect, then why do we struggle so often to fall into it?

Emil Cioran, the Romanian philosopher, observed that ‘Only humanity has insomnia’ (On the Heights of Despair, 1934). It seems that there is something about the human mind that gives it the capacity to sabotage the body through restricting its natural sleep cycle. How is it possible that the brain has the strength to override evolutionary necessity? And why would it do so?

Generally, philosophy has a history of repudiating and resenting sleep, seemingly with good reason. The Ancient Greeks in particular appear to have hypothesized quite on the perceived ‘uselessness’ of sleep. Plato proclaims in his Dialogues that ‘Much sleep is not required by nature, either for our souls or bodies, or for the actions in which they are concerned’. Pythagoras furthers this distaste towards slumber in the Golden Verses: ‘Practice restraint over the following: appetite, first, as well as sleep, lust, and anger’. This begrudging attitude to the natural processes of the human body can be analyzed as being borne of the realization of our incredible capability to use our minds for our own non-essential means, ie, to philosophize, to dream, to create. Advanced civilisation gave us the possibilities of thinking and imagining, while prior our mental and physical energy was directed towards survival. But in allowing us the time to dwell on our existence and theorise on the questions that surround this existence, these social and structural advancements seem also to have led to an exponential growth in insomniacs throughout history. Anne Dufourmantelle furthers this concept of ‘excess’ mental energy in her 2003 work Blind Date: Sexe et Philosophie, asserting that ‘philosophy was born with anxiety, with questioning, with insomnia. It takes upon itself the ills of the world, and thus it cannot sleep’ (retrieved from https://www.chronicle.com/article/the-philosophy-of-insomnia).

But Ancient Greek thought was not so limited as to always damn the act of sleep. In the myth of Endymion (discussed at length by Propertius and Theocritus, but no original narrative fragments have survived), the gods grant a wish to a youthful hunter: ‘to slumber undying and ageless through all of time’. Though it is unclear whether this statement is positive or negative (does he really want to sleep forever?), perhaps it indicates the wonder of the sleep state, where the human hangs seemingly effortlessly in the balance between mortality and immortality. Is sleep a sort of death, and can thanatophobia (fear of death) then come into play as reasoning for insomnia? Is sleep an alienation of the soul from cosmic harmony, as is proposed by Heraclitus? As a remedial comment on this concept, Heraclitus also remarks on the significance on the ‘private’ cosmos that the sleeper himself enters into upon sleeping that enables to fully experience that ‘cosmic harmony’, implied by the line ‘A man kindles a light for himself in the night when his eyes are extinguished’ (interpreted by Mansfeld, 1967). But if, as Victoria Wohl claims, ‘Waking and sleeping are a quotidian experience of the underlying dynamics of the physical universe’ (The Sleep of Reason: Sleep and the Philosophical Soul in Ancient Greece, 2019, UCL Housman Lecture, p. 9), then why is this ‘quotidian’ so often difficult to attain?

‘The Sleep Foundation’ propounds that insomnia arises from ‘a state of hyperarousal’, which can occur as a result of both mental and physical issues (examples of these being stress, caffeine, alcohol, over-tiredness, and synthetic stimulation). The circadian rhythm, that pattern which regulates our internal rhythms of waking and sleeping in accordance with the daily rotation of Earth, is inevitably disrupted by this so-called ‘hyperarousal’ of the mind. Speaking purely anecdotally, when in moments of insomnia I cannot seems to attribute any cause to my incapability to drift off, but when I realise this incapability, my mind begins to develop into a state of anxiety and panic, thus further arousing itself and pushing the probability of sleep farther and farther away. Upon finally waking in the morning and having forgotten how I managed to actually get to sleep at all, I immediately recognise that my mind is already filled with waking preoccupations to do with work, the future, and the inevitability of having to drag myself out of my comfort to face the day ahead. So, of course, these thoughts are bound to infringe at least slightly on my sleep, as it seems of late that I can never quite switch off, even when the lights go out.

Though there is not much scientific backing around the folkloric impact of the moon on sleep, I also often find that sleep becomes increasingly difficult during the peak of the lunar phases (specifically on the night of the full moon). I don’t avidly follow the moon cycle, so I cannot claim cognition of this event to have any conscious psychological impact on my sleep, but when I notice the fullness of the moon the next evening I feel inclined to (jokingly) ascribe my insomnia to this phenomena.

One thing is certain: our lifestyles are inherently linked to our failure to sleep well. We live with constant distraction: social media, television, online workspaces, loud city noise, ever-glowing streetlights…all these inevitabilities of modern-day existence can be named as partly responsible for our inability to fully disconnect from the waking in order to indulge in the full glory of sleep. But then what of Sartre, and his La Nausée of 1938, where he states ‘I have such a desire to sleep and am so much behind in my sleep. A good night, one good night and all this nonsense will be swept away’? Sartre, living in the mid-20th Century, was not exposed to such phenomena as the internet, or television that never stops, or the constant flashing lights of advertising billboards, and neither were the Ancient Greeks, yet they too struggled to find the mental means to fall into sleep. So, the bottom of the mystery of insomnia, one might come to think, is simply the intricate evolution of the mind that has rendered it to be so full of convolutions that sleep pales in comparison to the excitement and possibility of complex thought.

Perhaps if we discover the key to full conscious manipulation of body and mind then we might find ourselves able of some repose. But, as of yet, mastery over the mind seems to have been an unsolvable problem that is as old as time itself.

Consequently, I can safely bet that you’ll have some sleepless nights for some time to come.

Perhaps I can offer you a poem to distract you from this inevitable fact. It’s a poem that I wrote when the rain was pounding on my windows, and, instead of sleeping, I lay and listened to the droplets, watching them fall in torrents before my eyes, until I finally fell into a deep and wonderful slumber.

The window pane in my room

Is misted from the cold and the hot

And when I focus my eyes

I can see the water, and the lights

Are blurred into one long light.

But when I focus on the light

The water is blurred, and the lights become

Other windows, windows of carriages

Lighting the walls around me

In a meandering line of silent yellow squares –

And I wonder what I’m doing here

This Carl Kruse blog homepage.
Contact:  carl AT carlkruse DOT com
Other articles by Hazel Anna Rogers: Socrates and Weightlifting
Appreciation of the Humble Map and Grimes, Music and the Future of AI Art.
Find Carl Kruse on Vator here.

4 thoughts on “Sleep and the Enduring Insomniac”